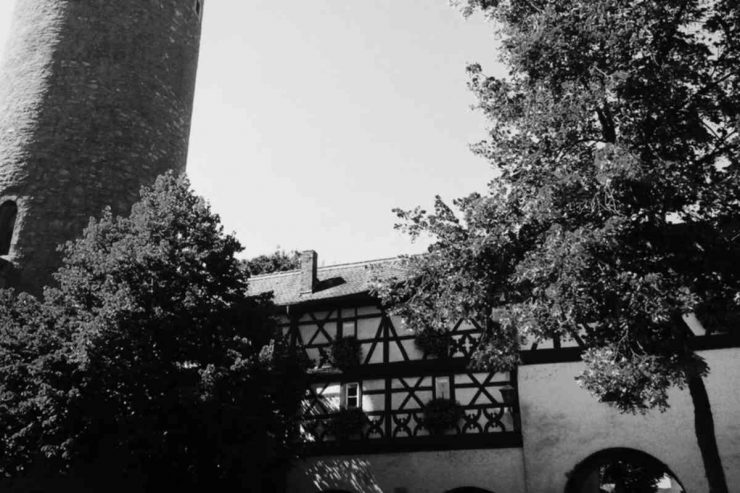 The history of the city of Ochsenfurt is not only long. It is also multi-faceted and has some really exciting legends to offer. Or is it more than just a legend?

There is, for example, the actual presumed existence of a royal court. The area of ​​this “hotel” for imperial princes and the highest Franconian nobility is now to be found in the area of ​​the inn “Zum Storchen”.

Famous faces have seen this Medieval Town however throughout the centuries. Ochsenfurt, which was mentioned for the first time in 725 AD, was, for example, pleased to see the visit of a certain Emperor Mathias von Habsburg, Emperor Charles the V, or King Ludwig the I of Bavaria.

Not always it has been a true joy for the visitors to come here. A certain Richard Lionheart (famous King of England in the 12th century) was imprisoned in Ochsenfurt, after he had been placed on his return from the Holy Land.

However, the term “guest” would probably be more likely, since his stay in Ochsenfurt during the ransom negotiations in Würzburg might have been rather pleasant for him and his followers.

The myth around Hans Stock – the blacksmith from Ochsenfurt – is inseparably interwoven with the history of the town. Hans Stock accompanied the host of the knights of King Konradin to Sizil in the 13th century. The King, who was also King of Jerusalem, wanted to recapture the same at the tender age of 16.

King Konradin, however, failed, and was publicly executed Anno Domini 1268 in Naples. The Era of the Staufer was over. And the time of the German knights’ army would have been so. Disintegration threatened. The army leaders, especially Rudolf von Habsburg, wanted to prevent this.

Then one remembered the striking resemblance of Hans Stock to the decapitated King. In short, the young man from Ochsenfurt was forced to slip into the role of the King, and lead the army into the German lands on his retreat across the Alps. He did so. The plan went on. Hans Stock, the blacksmith, probably is one of the most important doubles, though largely forgotten by history, that has ever existed in German history.

The birthplace of the blacksmith is still to be seen today. Even you can stay in it. The hotel now houses one of the hotels in Ochsenfurt.

Anyone coming to Ochsenfurt or passing by, for example by train, will be attracted by the imposing city fortification.

But those walls of stone surrounding cities here in Mainfranken are nothing really special. But Ochsenfurt owns probably the best-preserved city wall, defensive towers and other fortification elements in Mainfranken.

In addition, the fact that even the smallest towns and villages around Ochsenfurt, or along the Main Valley, have a stone wall, is a very exotic occurrence, from the point of view of history.

Only cities were granted such a wall. Only with the appointment to a city certain regalia and privileges were connected in the Frankish empire. Thus also the market right and the right to create such a defense system.

In the 13th century, Ochsenfurt was actually given this right. Ochsenfurt became a city. The city wall was built from the 14th century on.

However, the fact that even the smallest village along the River Main have such a defensive wall is thanks to the fact that not only Johann Wolfgang von Goethe appreciated the wine from this special region (“No other wine wants to taste me”, Goethe once wrote in a letter to his wife and thus meant the wine from the cultivation area of ​​the “Würzburger Stein”). The extensive cultivation area for grape vines, was therefore not infrequently invaded.

To protect the valuable vines and wine, the nobility and the spiritual highness of the region braced the communities against unwelcome external attacks by means of stone walls and other defense systems.

Ochsenfurt today looks like as if time had stopped here, thanks to the fact that the city nearly didn’t see any destruction during the second world war.

However, the old Main Bridge was blown up in 1945 in connection with the arrival of the American occupation troops and fierce battles were carried out in the Ochsenfurter Forst at that time – the cityscape was, moreover, fortunately completely preserved. And so you can admire even today still very impressive city gates, defense towers or a church in the middle of the old town, that has been already here for 700 years on its culture hill. And hopefully it will be here for the upcoming 700 years.

Hotels in Ochsenfurt? Bed & breakfast? Our tips for everyone looking for possibilities on how to spend the night in Ochsenfurt.

You prefer a mobile home, a camping ground? On the following page you'll get information about where to camp in Ochsenfurt.

The town wall, the river, the vineyards, the sugar cane mill, the Ochsenfest, the forest of Ochsenfurt, the city moat, the costume museum, the sugar beet, the city. More than just heartfelt.

Where to stay for night
Camping